The Journey and Backstory 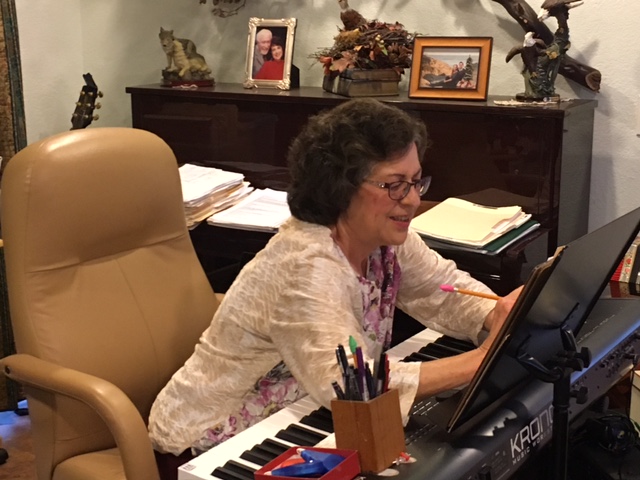 By coming to Heart of the Word Music, many of you may be wondering how did this kind of project come about? Here I will document my journey of becoming a writer of psalms, hymns, and spiritual songs so you can get a clear picture of the origin and development of this unique ministry.

I like to consider myself a psalmist apprentice because I am always learning and do not think I will be able to achieve the full title of psalmist until heaven where I will be “complete”. In the meantime, I will write all kinds of songs as long as I am able for the rest of my life. I feel absolutely called to it in this season of my life.

What follows is the story of the journey leading to this discovery that I can and need to write songs for and about God.

Always had a Love for Music and Rhythm

I was a very active child even in infancy, always moving and getting into things and trying to figure things out. My father had music playing a good portion of the time, all kinds, from classical to pop and dance music as well as what was on the radio. He even taught me how to cha cha cha at age 5. We had an old player piano in the “ spooky” basement. I used to love experimenting with it as a young child and would try to pick out familiar tunes. Finally, from age 8 until 16, I studied piano. I was not interested in classical music then so my instructor taught me chords and simple arranging of pop music and that was a super helpful tool for years to come, plus I unknowingly was learning some music theory as well.

In college, a sorority sister played Sonata Pathetique on our parlor grand Steinway and I fell in love with Beethoven, eventually learning that piece on my own. Piano was a hobby that gave me great pleasure and entertained others as well.

Music in a Christian Setting

I learned lots of the songs of the Jesus Movement in college at UC Berkeley in the early ’70s because I was involved with Campus Crusade for Christ there for 3 years and I still remember most of these songs today. I actually wrote my first piece of music at age 26 while in Christian graduate school of psychology and was motivated by insights I was learning in school. I called this piece of music “ Yearning” and did put it in sheet music form the best I could. It was similar to Ebb Tide which I had learned as a teen in my piano lessons. I had no idea what to do to polish and develop it or how to even communicate it to anyone but did keep it. It came together in less than an hour.

It was a Discovery Experience

After graduate school, I settled into my own apartment and joined a church in my new town. They used about 80% hymns and 20% contemporary songs and I loved it. I actually became familiar with many hymns while there for which I am very grateful. One of the best wedding gifts I received was a hymnal which I have used for nearly 25 years now!

I switched churches after moving to a nearby city and we had small home fellowship groups. For about 9 years I “played music” for the group but had no idea how to play accompaniment just played my own arrangement using the chord patterns I had learned years before. I had one of those keyboards with background beats and production elements and had so much fun experimenting with it. These were the years when I started wondering what it would be like to conduct an orchestra and had visions of that. I was always fascinated by the “ big picture” music of an orchestra but there was no way I could pursue it at that time. But I did become better at providing the music for my home group, choosing songs fitting for the lesson or discussion whenever possible. But that is also when I discovered there were not many songs for certain types of passages or subjects that were appropriate for corporate singing. I wanted to write them but really did not know how at that time. During those years I started learning drums and took 18 months of lessons. I returned to the guitar which I had some experience within college, and also experimented with the saxophone for a brief time. This was also the time during which I was raising an adolescent son with all of the fears and adventures that entails. There were so many potential pitfalls for a youth that I was concerned about. I had lots of lyrical ideas from these issues as well but could not quite figure out how to develop them into songs. There were profound truths I wanted to express but did not quite know how to do so.

I became interested in and started following many Christian artists on myspace and Facebook and was listening to and reading the lyrics carefully. I found a book on sale at the bookstore on songwriting and that was another helpful push. The real spark that got me started for real was a breakthrough in my spiritual life that had a profound impact on everything. That occurred in December of 2006.

After much stirring and false starts with lyrical development, I actually wrote my first full story song with lyrics and music and chords and groove on 1-1-07 at the age of 54. It was called Soul Search and reflected what I saw in a singer/songwriter who performed in outdoor malls nearby and I was intrigued by this person. Simultaneously, I was also inspired by several Christian singers and acquired their albums (mostly used) on Amazon and began networking with others like myself and we are still Facebook friends 10 years later! These individuals used their music in a variety of ministries in addition to church worship. They were involved with mentoring foster kids, prison ministry, etc. They were an inspiration as well and they were also trying to learn Christian songwriting.

So in that first year, I was songwriting a lot but the biggest development came from my new approach to Bible study. After exposure to a class on Bible study methods in our church, I developed my own method with the primary objective….. learn it as if I was going to teach it… this was an early seed idea for this Love Letters project but it did not come together until years later. But it was a huge immersion in the Word and loving the discoveries. I was eager to share them with others. Songs came from these studies in some cases almost every day. Some were just experimenting with lyrics and ideas but some turned into actual songs. One, in particular, I was very pleased with came from Jesus’ description of calling His disciples His “friends “in John 14. The song,” I Call You Friends “ was my first attempt at a purely interpretive song from a Bible passage. That was in February of 2007. And God was working on me in a different way as well because I started to get serious about and disciplined with praying for others. I would go on long walks for exercise and take my cards of info on who to pray for. I found those times of walking and praying amazingly refreshing AND numerous song ideas were birthed or developed there as well. Sometimes I found myself laughing out loud as prayers started rhyming!

In 2007 I actually started with a songwriting coach but cannot reveal their identity due to the contract I signed. That person wrote a song that became #1 on CCLI charts and remained there for a long time. I also started attending songwriting sessions at all kinds of Christian conferences all over the country and met and networked with many people. At one of those first conferences I met a vocal teacher whom I later emailed to tell her how much I enjoyed her class and what a pitiful singer I was.. only God knew she would become my best friend in a short while and through her, I have managed to network with many in the Christian music industry eventually leading to 2 other coaches with whom I have worked over these past 13 years. Each one helped me learn and polish different aspects of the songwriting and for their input, I am extremely grateful. I was also privileged to have mature and successful artists that I had networked with be willing to sing and produce this project as well. They are my heroes, all very gracious and humble souls.

My mother started the decline with Alzheimer’s dementia in about 2003 and I found myself needing to write a song about her. I actually wrote 2 of them over the years until she passed away in 2016. In 2010 I felt led to play music for the residents of a local nursing home and would also play for the residents of the memory care facility where my mother lived from 2010-2016. I went weekly to the local nursing home and visited 3 ladies who are there till they pass away and stayed about an hour with each one. It is a relationship that just happens to include music. (I have a portable keyboard) They are all severely disabled or paralyzed or dying of cancer or post-stroke but still able to relate and respond in some way. Many of these folks liked the hymns as well as songs of their generation. There are some beautiful songs from the ’20s, ’30s, and ’40s and my repertoire has grown tremendously. I have been inspired to write several songs about these folks as well and will likely have an album’s worth someday.

Heart of the Word Music

As a result of the Bible studies through books of the Bible, I started trying to write a song for each passage I was studying about 9 years ago. I have written through most of the epistles as well as songs from the gospels and bits and pieces of the Old Testament. Things going on in the culture and the church have also inspired many songs as well. The vision started then and has culminated in this Love Letters project as the first of many to come.

In future blog posts, I hope to explain just how some of the songs actually come together.

This Love Letters project, as well as my other songs, have been prayerfully developed. I want every part of the project to be God-honoring. Then for sure, it will be a blessing to all!